Another Place on the Lake, Lake District, Ullswater

The brief hiatus between Christmas and New Year is often referred to as ‘Betwixtmas’, a a sparkly, magical sounding time deserving of its own fanciful characters and festive cheer. There should be soirees where everyone dresses in velvet and cocktails are served under heaving yet tasteful chandeliers. Frosty days should be spent yomping out into the countryside, spaniels in tow; at night the children will play together quietly while grown ups lounge beside the fire.

The reality is often a little different. Parties have been banned until at least the 31st; the closest you get to velvet is the soft and over-washed pair of PJ bottoms you haven’t stepped out of since Christmas night. The only festive characters are the ones left to repeat on the TV and the kids are both exhausted and riding high on the never ending supply of selection boxes. It’s a time to give in to the inevitable and shelve being presentable until 2019. You may as well just have that cheese plate as a second breakfast and be done with it.

Slovenly and indulgent as this is, surrendering to such a low bar does however have its downfalls: when you find you actually do have to step out into the fresh air, the watery wintry light can be cruel. The power of speech has left you, leaving a stream of baffled neighbours and shop assistants in your wake. You’re sporting 8 different nail varnishes from a 6 year old manicurist. You appear to have been dressed in the dark by a toddler. All of which is a challenge at the best of times; more so when you find yourself pulling up at the doors of a rather grand looking Lake District hotel.

Thankfully this particular hotel is both grand, and very understanding. Another Place does a fine line in understated grandeur – everything is beautifully presented, but your entirely encouraged to wander around in your bathrobe. It’s the perfect prescription for post-Christmas jitters: beautiful rooms with excellent beds and claw foot baths, a pool and sauna with lake and mountain views, kindly Northern massage therapists to work away knots left by passively demanding relatives. Children are welcomed with board games and cleverly secreted away bean bags and games consoles under the stairs; at night the lounge becomes an indulgent adults-only space with roaring fires and smart waiters who bring warmed bottles of red to your spot on the sofa.

There are also food options for every taste. For those still game for a three course dinner, the fine dining restaurant awaits. Those of us open to the idea that not all festive meals need the calorie content for an Arctic expedition can opt for dinner in the bar instead (even more excellently, dogs are welcome here too). And it’s worthwhile leaving some room – back in the dining room, breakfast is as good as the rest of the rest of the stay would suggest. It is “DIY”, but in the most refined sense: a row of waffle makers, freshly cooked local sausages, bacon and eggs, artisanal breads and freshly made mueslis and juices encourage multiple courses. Pink-shirted staff take coffee orders and there’s a happily relaxed conviviality amongst the varied clientele, with toddlers still in their onesies tucking into giant plates of eggs on toast as hikers fuel up for a days’ hike in the hills, the rest of us happy to sink into the freshly delivered papers and – go on – just one more round of toast. 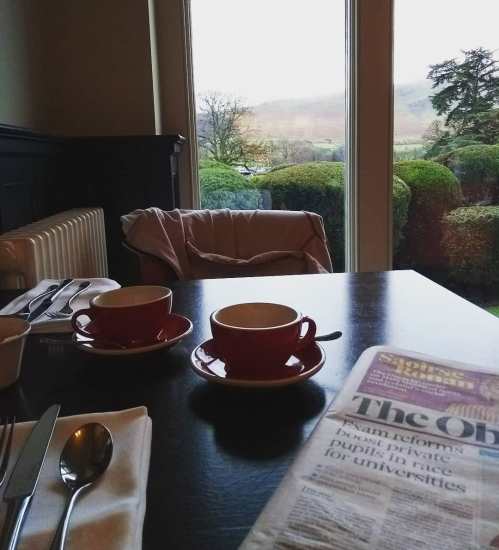 Xela had been described as “the perfect Guatemalan town”,  but as far as we could see it was just a town, in Guatemala. We weren’t overly keen to stay, but did so for a few days before we could set off on a three day hike east to Lake Atitlan, organised by a company called Quetzaltrekkers.

There are plenty of companies in Xela offering the same three day hike, but none can make quite the same altruistic claim as Quetzaltrekkers: run entirely by volunteers, the treks fund two projects for abandoned and orphaned children, with 90% of the money going towards a school and shelter in town.

The volunteers are a rag tag bunch who come and go as responsibilities allow, all passionate about the project (less so about cleaning). Our guides would be Tyler, an 18-year old American wise for his years except when mooning the camera, and Ofer, a wandering Israeli with excellent Spanish and a good line in sarcasm. Throughout the trip they’d inform us about the local flora and fauna, offer good stories and first aid kits for feet rubbed raw. They’d also ensure we ate well, with an emphasis on breakfast each day to see us through our 37 kilometre hike.

We started early on Saturday, hoeing down great plates of eggs and toast prepared in the office. After sharing out group provisions and packing 15 litre day bags, we set off for a short chicken bus that would take us to the suburbs. Then the walk began – at first a medium slope that would quickly turn into a steep one, prompting me to wonder whether the extent of my hiking experience (being carried halfway up a mid-sized Scottish mountain as a child) might not be quite enough.

The first hour set the tone for the day: breath-taking in every way. Once we’d conquered the steep slope we found ourselves in pasture land, with equally precipitous corn fields to tackle up and down, the locals all putting us to shame as men and boys shimmied up slippery clay slopes with huge baskets of wood strapped to their backs. Lunch was in the ‘cloud forest’, amongst trees entirely encased in white, then there were steep, dusty roads to tackle before a steady upward climb home.

The first night was spent in Santa Catarin Ixtahuacan, using a local’s property to sleep in, the balcony providing stunning views over the mountains while Tyler cooked as much pasta as the pot could handle. In the highlands it’s common for houses to have temescals, low, coal-fired saunas that resemble pizza ovens housed in a chicken shed. Taking it two-by-two we clambered in, instantly feeling our muscles relax as the hot steam worked its magic.

We set off early the next morning, feeling reassured that the worst was behind us. Breakfast was in a local comedor a short walk from our base, ensuring more than one business would benefit from our stay. Cups of strong cafecito (a sort of coffee/tea blend) and plates of beans, rice and eggs followed by banana pancakes worked like rocket fuel for the day – which was lucky, given what was to come.

We climbed up through more jungle, then lunched by the river after slipping down to the valley floor. Next would come Record Hill – an almost vertical climb taken one hiker at a time due to the narrow path and likelihood that you’ll need to stop (and possibly spew). Not quite beating the 11 minute record, neither did I win the wooden spoon (a weighty 40 minutes on a previous hike), coming in at a respectable 20 minutes or so.

We felt we’d conquered the worst… until Record Hill merged into Record Mountain, only slightly less steep and considerably more slippy. By the time we reached the promised ‘Ice Cream Village’ everything was sore, and a unique camaraderie started to build around the collective taping of feet to stave off blisters. The rest of the day involved thigh-testing descent, then the final ‘Cornfield of Death’, another raking climb, though mercifully shorter than Record Hill.

Finally we reached our second base at Don Pedro’s, in the village of Xiprian. There were fresh fruit smoothies on arrival, then a fantastic dinner of tamales, chicken and salad served by the Don’s wife; later there was a real fire with marshmallows to melt. Before bed Don Pedro would thank us all for coming and explain the good the project was doing, leaving us all feeling a little humbled and even more pleased we’d happened upon such a worthy cause.

For our final day we were up at 3:15am, quickly packing our sleeping bags and setting off in the dark to the nearby mirador to await sunrise. On the way we’d pick up our police escort, a precautionary measure introduced after a robbery some years before. Once at the lookout, Tyler and Ofer set about making breakfast – porridge, granola, jam and peanut butter and cookies made by the children benefiting from the scheme, all washed down with hot chocolate and shared with our friendly minders.

Before the sun appeared we watched a nearby volcano – Fuego – erupt in the distance, a far off lightning storm adding to the drama. The sunrise, when it came, was spectacular, throwing electric blues, oranges and purple across the sky, reflecting in the waters of Lake Atitlan below.

After breakfast it was a relatively short and bumpy climb down to the nearest town. Here we’d visit another local business, this time a coffee co-operative in San Juan offering excellent and much needed hot drinks to mark the hike’s end, at an incongrously early 9am. From here we’d take a truck to San Pedro to await our bags, taking the chance to cool off in the Lake and have one final meal together before saying our weary goodbyes.