Having spent three months lounging around (bar the occasional flurry of activity heading up a mountain, or down to the coral reef) we felt it was time to do something. Something useful, and hopefully enlightening: yes, we’d come to that embarrassing traveller phase of wanting to Make a Difference. We were, however, fully aware of the pitfalls of volun-tourism, not only a terrible mangling of the English language but potentially damaging to the local set up, too. So we did our research, and came across an opportunity to lend a hand on a smallholding near the Honduran-Nicaraguan border; the project promised to be about emersion in the local culture, a chance to get our hands dirty and help a hardworking family at the same time. Perfect.

As promised, we were well and truly off the traveller trail, with no other tourists in Mozonte other than another, long-term volunteer. Depending on age, the standard response from the local children would either be laughter or a look of utter confusion as we walked past, so infrequent were people of such a pale and sweaty persuasion. We were warmly welcomed by the family who graciously smiled as I stumbled through my limited Spanish (which I was quickly learning was far more basic than I thought). After setting up our camp beds, we settled down for an early night in preparation for a days’ work. And there was the rub.

The morning came. After breakfast, we drank some coffee, played with the dogs, drank some more coffee. Our host came and went, occasionally pointing out the various fruits and flowers as he passed. By midafternoon we started to think we’d missed something – had we been up too late? Was an instruction lost as we desperately tried to translate everything? By dinner we were feeling very guilty, having done nothing but fill our faces as the busy family brought out meal after meal. We resolved to gather the right Spanish to ask our fellow volunteer. She laughed and told us this was the way things were in Mozonte.

The following day, the pattern continued – a days’ worth of activity constituting staccato conversation, a couple of hours navigating the dictionary or a local paper, three sizeable meals, a nap, and approximately twenty five cups of coffee. All in all, an odd combination of total inactivity while being highly caffienated, leaving us somewhat twitchy.

In truth, it was a bit of a revelation that I wasn’t at ease doing nothing. I come from a long line of snoozers, people who can sniff out a sofa and a Guardian supplement from a mile away, a tribe known for its abundance of comfortable jumpers and an itchy trigger finger when presented with the ignition for a living room fire. Unsuspecting, overdressed guests have been known to melt if they sit still for long enough in our house – which they inevitably will, having eaten themselves into a comatose state.

We decided that a change of pace was required, and set about spreading potential ‘events’ across the fortnight we’d agreed to. Everything from visiting a nearby coffee finca to clothes washing, walking to the local park or sweeping the patio would be carefully allocated its own day, savoured like a bar of chocolate eaten one square at a time. Meals would be anticipated with some excitement, being both something we could find enough Spanish to talk about (while pointing at ingredients – “what do you call this? What do you call THIS?”) and really delicious. This was especially true of breakfast, usually involving scrambled eggs, fresh tortillas, windfall avocados and juice blended from one or more of the many fruit trees on the property. As soon as plates were empty, we leapt on them like maniacs, fighting each other off and rushing to wash them in an effort to be helpful.

It is perhaps a singularly British thing to feel this anxious about being in the way. We had, after all, paid to cover our food and our stay, so there was no reason to feel like we were taking our hosts for a ride. Nevertheless, a combination of our poor Spanish and the sense that everyone would find their jobs much easier without being interrupted by tourists madly miming at them left us feeling awkward. At one point we were invited to pick the ripe coffee beans. Fantastic! we thought, a contribution at last. As it turned out, it was job that definitely didn’t require two people slathered in bug spray and sun cream wearing their most sensible gardening gear, being as it was a ten minute task clearly only given to humour the overly keen house guests.

And yet. As time passed we grew a bit more comfortable in letting the conversation take a pause when we’d run out of things to say that didn’t involve the weather. We learnt to space out the coffees to avoid the tell-tale twitch in the eye. And, we were able to experience things that we otherwise wouldn’t have: going to a rousing local football match and learning all the bad words; watching the local universities fight it out in a bone-shaking drumming competition; getting a private finca tour by the owner, a man incredibly passionate about what he does, despite the problems of drought and the cheap mechanised production enabled by the likes of Starbucks, who ensure that coffee growers like Jorge have to sell their coffee for less than it costs to grow it. 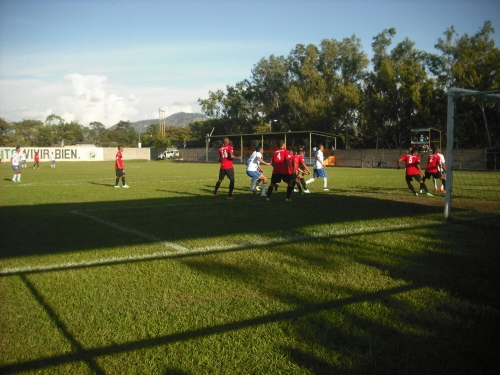 As chance would have it, on our penultimate day we were given a job, clearing ground for a new batch of broccoli seedlings bought with the aim of adding to the farm’s diversity. Unsurprisingly, five hours in and we were exhausted, grimy and sore – a brief but revealing lesson in what farming here really takes. As we came to leave, we were genuinely sad to be saying goodbye, and the constant noise and chaos of the capital Managua cames as a quite a shock. Though hardly experts in farming, we’d learnt a lot – and were ready to tackle the next adventure with gusto.